A brief history of the Anime Angels artbook 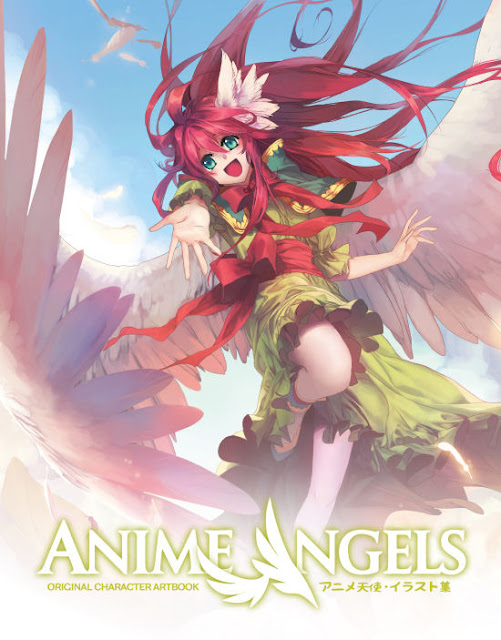 Anime Angels final cover, as used for the book. Art by Shilin Huang.

The Anime Angels artbook originated as an idea in early 2011, to see if it would be possible to gather a large amount of anime-style artistic talent into one ensemble artbook, under a unified theme. The project was put together under the umbrella of a one-person publishing company, Maron Media LLC, formed by Bruce Hahne, aka "Bruce the editor". The "home convention" for the artbook was Fanimecon, which is held annually in San Jose, California.

At Fanimecon 2011, Bruce spent two days walking the entire Artists' Alley, handing out information cards about the book project and inviting artists to sign up if they were interested in participating. Participation would be juried, so not all submissions would be accepted.

After Fanimecon, Bruce spent a lot of time doing followup to artists to see if they wwanted to sign up.The project also had a home at the Maron Media Deviantart page and the book-specific Anime Angels Book Deviantart page where more artists started to become interested and asked to sign up to send in submissions.

The project came together throughout 2011, with final submissions due in early 2012. Bruce worked with two professional anime fan artists to do the jurying and selection process. He wasn't comfortable taking people's art for free - creating art is a lot of work! - so all artists were paid a small amount of money for each accepted submission, or they could choose to receive a copy of the book.

After the selection process of the participating artworks was complete, Bruce launched a Kickstarter to build early sales, and the editing process began.

The cover art, "Angel in Green", was created by Canadian artist Shilin Huang. The front and rear cover design, and all of the internal layout and page number design, were handled by U.S. artist and graphic designer Finni Chang, who spent many hours making the book look great. The books were printed in the USA by Signature Book Printing in Gaithersburg, MD. The Signature Book printing was 900 softcover, 100 hardcover.

The Kickstarter completed successfully in March 2012. Its success was partly due to Megatokyo artist Fred Gallagher, who agreed midway through the funding process to contribute an original artwork to the book, and announced his participation plans on Twitter.

The original plan was to have books available for sale at Fanimecon 2012, and we had an Artists' Alley table reserved to offer them there, however we ended up with two challenges:

1. The original set of books delivered from the publisher had cover blemishes, and Signature Book Printing agreed to accept a return and run a reprint. The return-and-reprint process, however, meant that this set of books wouldn't be available for Fanimecon. Bruce worked around this problem by paying for a small batch (250 copies) quick turnaround printing at a local printer in San Jose, which offered (expensive) professional-quality laser droplet printing, for softcover only. The books provided to artists and sold at Fanimecon 2012 were from the San Jose printer.

2. Fanimecon informed us, at the very last moment, that its Artist Alley rules prohibited the sale of multi-artist artbooks where the person selling the book wasn't a contributing artist. Bruce worked around this problem by ignoring the rule :-) , but choosing to share the Maron Media table with another artist, to provide a diversity of other types of art available at the table.

Despite the challenges with Fanimecon 2012, we did distribute softcover copies of the books to all participating artists in attendance who had requested either personal, or wholesale, copies. Bruce also hosted a celebratory dinner for the artists, and a few special guests, at Il Fornaio restaurant, across the street from the San Jose Convention Center. Bruce also gave a presentation at Fanimecon titled "Going to Print: Publishing an Anime Artbook".

Meanwhile, we were able to ship softcover books to Kickstarter backers starting in May 2012, with hardcover books available a few months later after the reprint process completed.

The year of real sales success for Anime Angels came in 2013, when we again returned to Fanimecon, which at this point had modified its Artist Alley rules to allow for fan-produced multi-artist ensemble artbooks. We had our own booth just for Anime Angels, and we pre-advertised the book by handing out several thousand information postcards to Fanimecon attendees as they waited in the multi-hour registration line. Sales of the book each day were strong. 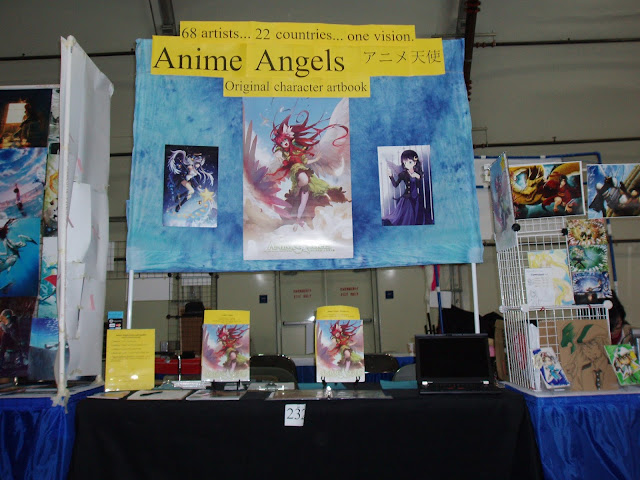 The Anime Angels table at Fanimecon 2013

In early 2013, Anime Angels was also accepted for U.S. national distribution via Previews magazine, aka "Diamond Previews", the official preorder wholesale publication of the comic book trade industry. A listing for Anime Angels appeared on page 374 of the June 2013 issue of Previews, in an excellent position right at the top of the page. This listing resulted in wholesale orders of several hundred copies from comics shops around the U.S., and meant that Bruce had to spend a few days preparing several boxes of the books to ship to Diamond's distribution warehouses.

Bruce turned down the original web site, AnimeAngelsBook.com, roughly in 2016, but the domain now redirects to this blog page.

Key links:
- Kickstarter campaign, including the launch trailer video for the book.
- Deviantart portfolio of selected artwork from the book.
- The Maron Media page at Deviantart.
- Anime Angels in the Library of Congress.
- Professional home page of Shilin Huang, the cover artist.
- Professional home page of Finni Chang, the layout and design artist.

Archive content not yet released, but maybe someday:
- "Anime Angels: The Editor's Story", a supplementary video for the Kickstarter launch featuring Bruce speaking in front of a badly-done greenscreen. :-)  This was originally available publicly, but I took it down soon after the Kickstarter campaign was complete.
- Slides from Bruce's 2012 Fanimecon presentation, "Going to Print: Publishing an Anime Artbook".
- Brief interview videos with selected participating artists, Fanimecon 2012.
- Footage of Bruce's congratulations speech to the artists, Il Fornaio restaurant, 2012.